In the summer of 2012, as part of the London Olympic Games' Cultural Olympiad and the World Shakespeare Festival, Shakespeare's Globe hosted the hugely successful Globe to Globe Festival. This unprecedented six-week event saw companies from across the world perform at Shakespeare's Globe in over 30 different languages.

Now you can watch 10 of these performances on Drama Online. The Shakespeare's Globe to Globe Festival on Screen 1 collection will support all courses in Shakespeare's plays, and especially those exploring: global performance; intercultural production, interpretation and reception; and themes such as gender across global cultures. All films will have audio in their original language alongside fully translated English subtitles.

Further collections will launch in 2023 and 2024, growing to a full offering of 30 filmed performances. 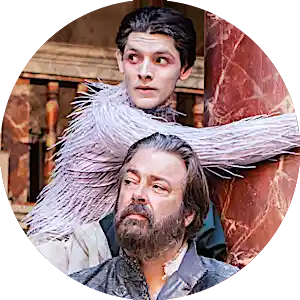 Antony and Cleopatra
(Language: Turkish)
In 1999, Haluk Balinger, an Istanbul star of stage and screen, built the pioneering Oyun Atölyesi, now the leading light of the Turkish theatre scene. Haluk returned to the UK as Antony in this production, which also features Zerrin Tekindor as Cleopatra, and Kevork Malikyan as Enobarbus.

Coriolanus
(Language: Japanese)
This renowned company from Kyoto works under the direction of one of Japan's most imaginative artists, Motoi Miura. Known for its minimalist vision, this company produces an expressive theatre rooted in the exploration of words, sound and the human body.

Hamlet
(Language: Lithuanian)
Lithuanian director Eimuntas Nekrošius' Hamlet has toured the world. Nekrošius' work engages with the sheer diversity of human nature, at once funny and violent, visceral and light-hearted.

The Merchant of Venice
(Language: Hebrew)
The Habima is the centre of Hebrew-language theatre worldwide. Founded in Moscow after the 1905 revolution, the company toured the world before eventually settling in Tel Aviv in the late 1920s. Since 1958, they have been recognised as the national theatre of Israel.

Much Ado About Nothing
(Language: French)
In the Cartoucherie de Vincennes outside Paris sits a bold and enterprising venue, the Theatre de la Tempete; Clément Poirée's Hypermobile company is one of the principal groups who give this theatre its impressive reputation. This bittersweet performance is set amid the hypertensions of an Italian restaurant.

Richard II
(Language: Palestinian Arabic)
Ashtar is a dynamic Palestinian theatre company founded in Jerusalem in 1991. In 2010 they performed The Gaza Monologues, stories told by the young people of Gaza through an unprecedented project involving 44 theatre groups from around the world. Ashtar brings its direct storytelling style to Shakespeare's masterpiece of dislocation.

The Tempest
(Language: Bangla)
As well as pioneering new Bangladeshi drama, the Dhaka Theatre, Bangladesh's most prominent theatre group, has staged The Merchant of Venice and Brecht's The Resistable Rise of Arturo Ui. Often called Bengali, Bangla is one of London's most widely spoken languages.

The Two Gentlemen of Verona
(Language: Shona, a language of Zimbabwe)
A two-man Zimbabwean riot of love, friendship and betrayal. From Verona to Milan, via Harare and Bulawayo, Valentine and Proteus vie for the love of the same woman. In a triumphantly energetic 'township' style, Denton Chikura and Tonderai Munyevu slip into all of the play's 15 characters, from amorous suitors to sullen daughters, depressed servants and even a dog.

The Winter's Tale
(Language: Yoruba, spoken in West Africa, primarily in Nigeria)
The Renegade Theatre initiated the Theatre@Terra project in 2007, where plays were produced twice every Sunday in Lagos without interruption for over 3 years - a feat unparalleled in modern Nigeria. Yoruba folk tales inform this magical new production.