This essay explores the way in which the Drama Online collection engages with the contribution made by women in the field of Shakespeare studies – as actors, directors and critics.

Read 3 free chapters from our Critical Studies and Performance Practice collection, as well as the the Arden 3 Hamlet Act 1, throughout this term.

Women first appeared as actors on the professional English stage in 1660, with a now unknown actress playing the role of Desdemona in Thomas Killigrew’s Vere Street Theatre production of Othello. Since then, numerous female actors have excelled in performing Shakespeare’s characters; both female and, increasingly in the 21st Century, his male ones as well, as cross-gender casting has become a common feature of Shakespeare productions in the contemporary British theatre. Some of the most famous productions in recent years to feature women in male roles have been those by female director Phyllida Lloyd for the Donmar Warehouse, featuring an all-female/ non-binary cast, led by Harriet Walter (pictured left). Lloyd's trilogy of Shakespeare productions, available on Drama Online, began at the Donmar Warehouse in 2012, with a production of Julius Caesar, set in a women’s prison, featuring a diverse cast - some of whom were ex-offenders. The women’s prison became a framing device for two more productions – Henry IV (an amalgamation of Henry IV Parts 1 and 2) performed at the Donmar in 2014, and The Tempest, staged at the Donmar’s pop-up space in King’s Cross in 2016. The three productions were filmed at the Donmar King’s Cross in 2016 over two days, using multiple cameras. Although initial reactions to the project were sceptical, and even hostile, the productions have since been recognised as one of the most important contributions to contemporary Shakespearean production. The film of Julius Caesar was chosen for the Edinburgh International Film Festival in 2017 and shown in cinemas across the country. The Donmar Shakespeare Trilogy on Screen on Drama Online is accompanied by a series of Educational Resources.

Although female actors have gradually gained a greater equality of casting with male actors in Shakespeare productions, partly due to productions like the Donmar Trilogy, and ERA’s (Equal Representation for Actresses) 50:50 campaign launching in 2017, Paige Martin Reynold’s book Performing Shakespeare's Women: Playing Dead uses the notion of ‘playing dead’ to explore the challenges still faced by female actors performing Shakespeare today. Reynolds uses the image of ‘playing dead’ to explore various ways in which female performers in Shakespeare are faced with artistic starvation – restricted by critical expectation, casting conventions and by the agency denied many of Shakespeare’s female characters.

Women have taken roles that might be described as ‘directorial’ in Shakespearean productions since the Restoration, though their contributions have regularly been side-lined. Names like Eliza Vestris, Mary Anderson, Lillie Langtry and Edy Craig are rarely mentioned alongside those of the famous male theatre managers of the 19th Century. The first woman to direct Shakespeare at the RSC was Buzz Goodbody in 1970; the second was Sheila Hancock in 1983. Cicely Berry was the first woman to direct a Shakespeare at the National Theatre (Cottesloe) in 1986, followed by Deborah Warner (Lyttleton) in 1990. As Elizabeth Shaffer explored in her book Ms-Directing Shakespeare in 1989, women directors were (and possibly still are) ‘statistically . . . much more likely to direct Shakespeare in the provinces than in London or at the RSC’ (p.3). There has still never been a female artistic director of either the RSC or the National Theatre, although Erica Whyman has been RSC Deputy Director since 2013. Shakespeare’s Globe Theatre, by contrast, has had two female artistic directors in its comparatively short existence – Emma Rice and Michelle Terry – both of whom have directed Shakespeare productions available on Drama Online. Emma Rice became Artistic Director of Shakespeare’s Globe in January 2016, leaving in April 2018, following disagreements with the theatre’s board. During her tenure she directed two highly innovative Shakespeare productions – A Midsummer Night’s Dream (pictured above) and Twelfth Night, both available in the collection Shakespeare’s Globe on Screen 2. Both productions are notable for their eclecticism – combining Shakespeare’s text with contemporary music. The visual aesthetic of A Midsummer Night’s Dream is a mix of modern and Elizabethan dress, with a touch of Bollywood, whilst Twelfth Night is set on a cruise ship and a remote Scottish island in the 1970s. Both productions also played with ideas about sexuality and gender, most notably in the gender swapping of Helena to a young man – Helenus. Following Emma Rice’s departure from Shakespeare’s Globe the role of Artistic Director was taken on by actor Michelle Terry, who instigated a gender blind, race blind, disability blind casting policy with a 50-50 gender split for her first season of Hamlet and As You Like It, both available in the Shakespeare’s Globe on Screen 1 and 2 collection. The productions were presented by an ensemble of actors, directed by Federay Holmes and Elle While. Terry herself played the title role in Hamlet and Adam in As You Like It. The Globe Ensemble is an ongoing feature of Shakespeare’s Globe, inspired by the practices of the Early Modern Playhouses. 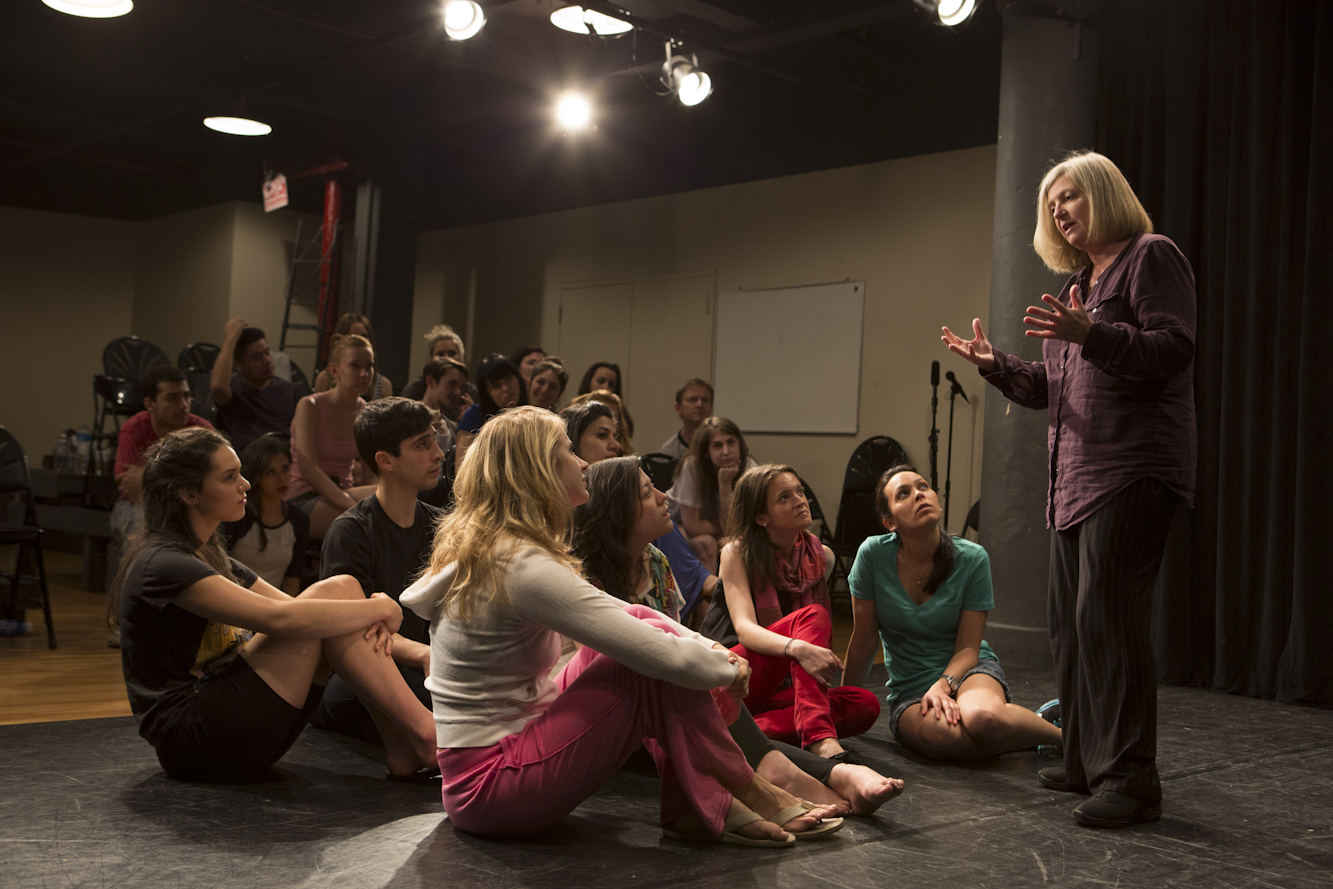 One of the main sources of information and advice about the performance of Shakespeare’s text over the past 50 years has been a series of publications by teachers of Voice and Text, many of them women. One of the first teachers of Voice and Text to publish a book on the subject of verse speaking (including Shakespeare) was Elsie Fogerty (The Speaking of English Verse, 1923). Fogerty was a key figure in British Drama training and founded the Central School of Speech and Drama. There, she taught Gwynneth Thurburn, author of Voice and Speech, 1939 and second principal of Central School, who in turn taught Cicely Berry, former Head of Voice at the Royal Shakespeare Company and author of a number of books about speaking Shakespeare’s text. At Central School, Berry taught Patsy Rodenburg (pictured left) who has become one of the country’s most revered teachers of Voice and Text and in particular the speaking of Shakespeare. She was Head of Voice at the National Theatre for 16 years and Head of Voice at Guildhall School of Speech and Drama for over 30 years. Rodenburg is the author of Speaking Shakespeare (Methuen, 2001). The Drama Online Library has a six hour Shakespeare masterclass with Rodenburg entitled Shakespeare in the Present. The masterclass provides a series of physical and vocal warm-ups, analysis of the Shakespearean text and sessions with renowned actors performing key Shakespearean speeches and provides students with an insight into Rodenburg’s valuable work.

Women have also made a significant contribution to Shakespeare scholarship, as critics and editors. The first woman to produce a substantial critical publication about Shakespeare’s work was Charlotte Lennox, in the middle of the 18th century. Lennox’s publication Shakespeare Illustrated (1753-4) was the first detailed comparative study of Shakespeare’s sources and is an important milestone in literary criticism more widely. Other female critics followed in the 18th and 19th centuries, including Elizabeth Montagu (1718-1800), Elizabeth Griffith (1727-1793) and Mary Cowden Clarke (1809-1898), who was the first woman to edit the Complete Works of Shakespeare in 1860.

The book Women Making Shakespeare: Text, Reception, Performance covers all of the areas explored above and spans the period from the seventeenth century to the present day. It contains a series of essays about women’s involvement in ‘making Shakespeare’ – through scholarship and editing, reception (including the adaptation of the plays into other mediums) and performance. Dedicated to the female Shakespeare academic Ann Thompson, the book celebrates the contribution made by women in their engagement with Shakespeare – as printers, critics, editors, painters, teachers, suffragists, theatre managers, authors, actors, directors, and theatre practitioners. The essays are about women, and many are also by women, who are leading academics in the field.

Professor Ann Thompson has been, since the inception of the series in 1983, one of the General editors of the Arden 3 Shakespeare, alongside Richard Proudfoot, David Scott Kastan and later H.R.Woudhuysen. The series offers scholarly modernised texts of the plays, with detailed notes and comprehensive introductions which explore the plays’ theatrical, critical and historical contexts and is available through the Drama Online Core Collection. Ann Thompson co-edited Hamlet for the Arden 3 series in 2006. She was not only the first woman to edit Hamlet, but the first editor to create a modernised, critical edition which presents the three texts of the play (Folio, Quarto 1 and Quarto 2) separately, acknowledging their significant differences.

Read Act 1 from each version:

Visit our Previously Featured Content page to view other topics including Drama without Borders: Stories of migrants and refugees, The Climate Crisis in Theatre, Black British Playwrights, and LGBTQ+ Playwrights.